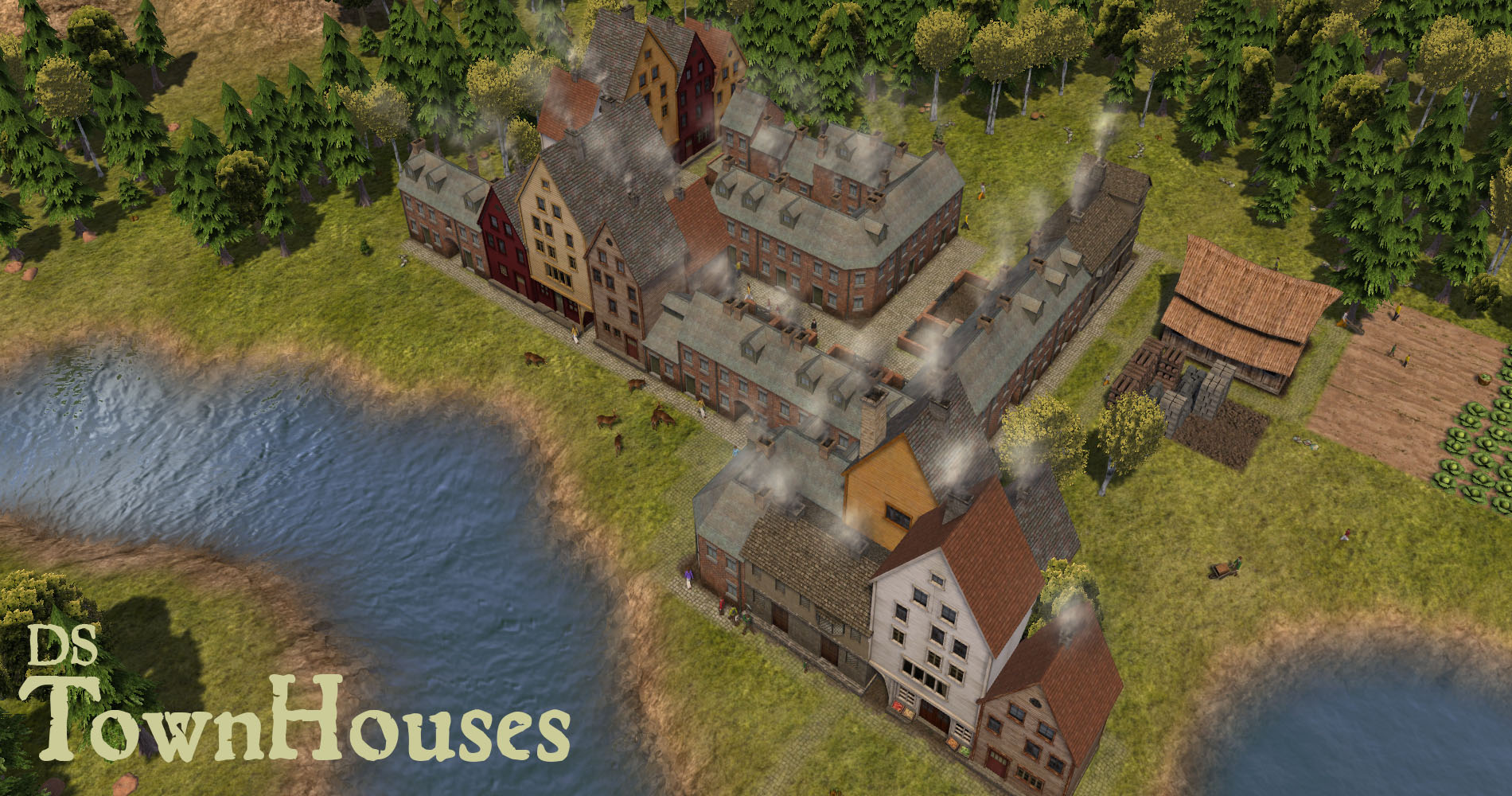 I have released a new update to DS TownHouses: v3

A minor hiccup in the first v3.0 release with a too easily achieved (& sorry, known about) crash problem with too large a family moving into a too small a house. The other, a missing demolish button from the UI panel of a road-buildable townhouse storage. A quick update and the main release is v3.0.1. If anyone was misfortune enough - sorry - to download and start playing v3.0 I have also released a patch mod that will add the missing demolish button to the storage. The crash will only persist if you free build with debug tool and force a larger family into a too small home at the start. It is unlikely you will encounter this crash if you play normally and build the houses later after you produce or trade for the items.

The changes bring the mod up to 'level' with DS Industry Mining BETAv.02. It is suggested you play with this mod, and place DS TownHouses above DS Industry Mining (unless I really say otherwise, you should do this with all my mods; latest at the top of mod list).

The update adds a new Brick town house with copper roof, lime mortar, offering exceptional heating and warmth ratings, they are a sure step up for your citizens once you have the required construction materials. This of course makes use with Bricks, Copper, Lime, Timber, Iron Fittings, Glass and more. All available to produce with DS Industry Mining, but I also recommend adding many of my other mods like DS Jetty & Bridge, DS Thompson Trade Merchants, DS Oil Mill, DS Timber Mill, DS Mead Brewing to name but a few.

v3.0.1 can be downloaded from worldofbanished forums, or it can be downloaded from nexus mods along with early versions and the patch for v3.0. I have also made a single separate compile of the new Brick housing added in v3, DSTownHousesTypeC.pkm, it can be used with the earlier v2 in a save-game. But I also intend to release the other types as single downloads, these single townhouse compiles will only be available on Nexus Mods.

a message to Steam subscribers of my mods:

After such a time period away, and starting to release mods on other platforms, I felt I should post a message to Steam subscribers of my mods about my decision to not update my mods on steam workshop at this current time. I outline the reasons in the message below, posted here.

After a break from modding Banished, I have now been able to find some time to return.

I had already planned on making my mods a little different than the rest, this was started late last year. The introduction of a slightly re-worked Flag Limit system, different to both CC and The North (and standard Banished game) I began introducing with my latest updated mods at the start of the year: DS Mead Brewery and DS Thompson Trade Merchants. The changes are small, and for the most part it remains 'semi-compatible' with both of them mods.

For the good part of 2-3 years I have been working on a mod that was firstly released as a single Iron Ore Blast Furnace (DS Blast Furnace), it had a few changes in development, one orientated towards playing with CC, and the other with The North. As I expanded the mod I realised that I was being hampered by the constraints that other mods made upon my own vision. This was particularly evident with CC, though nothing against it, their game economy was built around a whole different set of resources than what I wanted to achieve. As CC uses many of the standard vanilla production outputs, values and recipes this was always going to cause an issue, as I wanted to essentially add a need to mine. The standard production and resource variables do not lend themselves to making an in game economy that would be beneficial for mining, it is already easier to trade for iron than simply mining for it.

I switched to making the mod around the values in The North, which had already greatly increased the value of Iron, as well as already having a multi-levelled iron production (iron ore - iron bloom - iron). I changed the name to Industry Mining in the North, expanded the mod greatly, but I still came to a place where I was being forced to abandon ideas and my vision because the variables were still not weighted in the direction I needed them, but even more so I felt I was impeding upon the North. The North by Tom Sawyer remains one of those great mods that is perfectly polished and a joy to play. I actually play Banished rarely apart from play testing my mods, but when I do, I normally play a game with just The North.

So I changed the mod again... changed my whole outlook. Name changed again to simply DS Industry Mining. A long time in production started, and I knew if I was going to start going my own direction, I had to bring all my other mods with me! a daunting task as there are mods that are so far out of date, I always feel dread at updating them. I have learnt everything as I have went in the last few years of modding, I had no real previous experience in any modding, and had only just started to play around with using blender to create 3d models, with no experience in texturing or even exporting them from blender!

So what does this all mean?
Well I hit a roadblock. I was struggling to find a balance in the game from my changes I was making, things were over-powered, while others were massively under. I altered the production and values, struggled to get consistent results, then tried adjusting the citizen ageing which caused me even greater problems. Real-life intervened and saved me from burning my computer.

I've been back and modding the last month, getting my head around what I had done, and was attempting to do. I reverted a lot of the ageing and production changes back a bit and started going back at it from a standard vanilla ageing. But not a week into it and I was feeling pretty burdened and couldn't get a balance at all. The same problems persisted, but I decided I had to release what I had and get some feedback.
I find when I'm modding banished now, I think I struggle to get a good perception of what a player experiences when they play the game. Perhaps because I cannot seem to play a long enough game with my own mods without stopping and wanting to alter or add something. There is not often now that I go above 30 game years, whereas when i was a player I was normally playing to around the 200yr mark.

I would say I've had a bit of a perception shift. I haven't been good in the past at maintaining and updating my mods to a good enough standard. I have a lot of ideas and this made me produce a large output, but my quality was not there (I think) in properly producing and expressing the ideas. Some mods were rushed, and add that to my inexperience and constantly learning and evolving in my methods, some of my early mods are a mess and shamble even to me, so I'm sure some players are mystified. I can't make the same mistakes again, but I still need to push 'unfinished' mods out to the public for perception, ideas and feedback. But I'm going to ensure I keep them updated and serviceable.

Behind the scenes in my latest mods I have made large 'structural' changes. This now allows me to easily share resources, and keep a common trend amongst my mods. The 'engine' of this; the core UI changes, texts and icons are still being added to and altered. But the same is with the resources, though the problem lies in my ever having to alter the resource production values to cater the DS Industry Mining mod.

This ever changing and altering is not good for save-games or players on Steam who subscribe to my mods, that is why I never released the mod to the steam workshop as players would have no control of the update and break their save. I know I have done this before many times, but now I knew it was to be more often, and I could only hope to have some testing done with some players who were aware that this was a beta and could choose to opt in to a new update. So I made a decision to not yet add to steam, but as I said earlier, I needed to bring all of my previous back catalogue into this new game economy, so that means there will not be any new updates to my content mods on steam until I am happy I have a consistent game economy and there will not be any major changes to the resource and production files.

Cookies are used in this site, do you agree to the use of? more information